Have you ever considered getting a garbage disposal? There are many benefits in doing so. Garbage disposals are good for the environment, because they cut down on waste that goes into landfills.

They simplify your life because there is less trash for you to remove from your San Antonio, TX home every week. They can also prevent other household problems, which we will explore in more depth below. 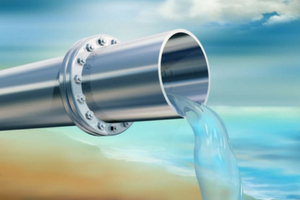 Most people have experienced a clogged drain at some point in their lives. It can be messy and inconvenient.

You might also suffer expensive water damage from a backed up drain. You can avoid this whole clog headache simply by getting a garbage disposal put in.

Clogs are formed by a number of things, but most commonly are formed by food matter falling into your sink. Over time this debris can gather in the pipes and drains which means that you’ll be dealing with a pesky clog.

Your plumber might be able to get rid of it with a plumbing snake, or you may need more force, like hydro jetting. However, if your food waste is going right into the garbage disposal, you won’t have to worry about clogs.

Help you Clean Your Dishes 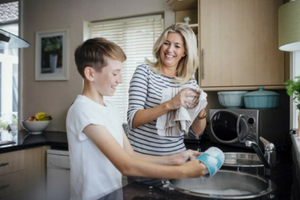 Scraping plates into the trash can and cleaning them under the faucet in the sink can be a bit cumbersome and messy.

You are probably tracking a mess all through your kitchen, not to mention letting food matter get down your drains.

Having a garbage disposal is a one-stop shop. You can clean and rinse your plates in the same place, all while getting rid of food scraps. 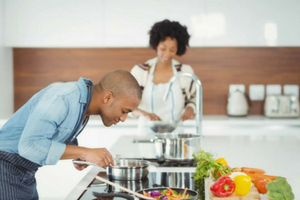 Not only will food matter falling down your sink cause problems with clogs, the same food particles can cause some serious odors in your drains.

If you compress that food waste and wash it away through the garbage disposal, you won’t have to worry about it.

The same goes for your garbage bags. You can use some scented bags to try to reduce kitchen odors, but that doesn’t really go very far. It’s better if you can eliminate what is causing the odors- your garbage- through a garbage disposal.

Although your garbage disposal can tackle most organic waste, there are some items that you should never put down there because you’ll break the blades. Keep fibrous items, like peapods and celery or very hard items like nutshells and bones away from there.

"Absolutely love the care we received from A&A Plumbing. Kyle was patient and explained everything in terms my 80+ year old parents could understand. He truly showed compassion and helped alleviate their fears. What a blessing to have such a company as A&A Plumbing in our community."

"Patrick and Sergio were very informative and helpful and openly answered any questions I had. They are pricing a remodel job and I never felt like they were pushy or trying to sell extras. Great experience overall."

"I just wanted to give a shout out to A&A Plumbing and specifically to our tech Ryan. Today during our service call he came with shoe covers, a mask and gloves and provided excellent customer service. He was incredibly knowledgeable and thorough. I highly recommend them for your plumbing needs."

We don’t carry out one-size-fits-all solutions. Our experts take your particular needs into account and work with you to decide on the best service. We present you with options that take into account your property’s needs as well as your budget. You won’t experience rush jobs or shoddy workmanship. We take the time to address all of your questions and concerns, ensuring that you receive the level of service you deserve.

Your A&A plumber will perform a comprehensive assessment before starting any work. Once we know the source of the problem, we are then able to recommend the most cost-efficient solution. If we believe that a repair will serve you better than a full replacement, we will let you know. Our goal is to help you save money and live more comfortably without the risk of further surprises.

We Keep Your Property Clean

Our team respects your property and values your time. We wear shoe covers and keep the work site neat so you don’t have to spend any extra time cleaning up after we are through. Our goal is to make sure you are able to enjoy the comfort of your own home or workplace without any additional hassle. This way, you can get right back to your most important tasks or relax knowing that unexpected problems won’t be occurring any time soon.